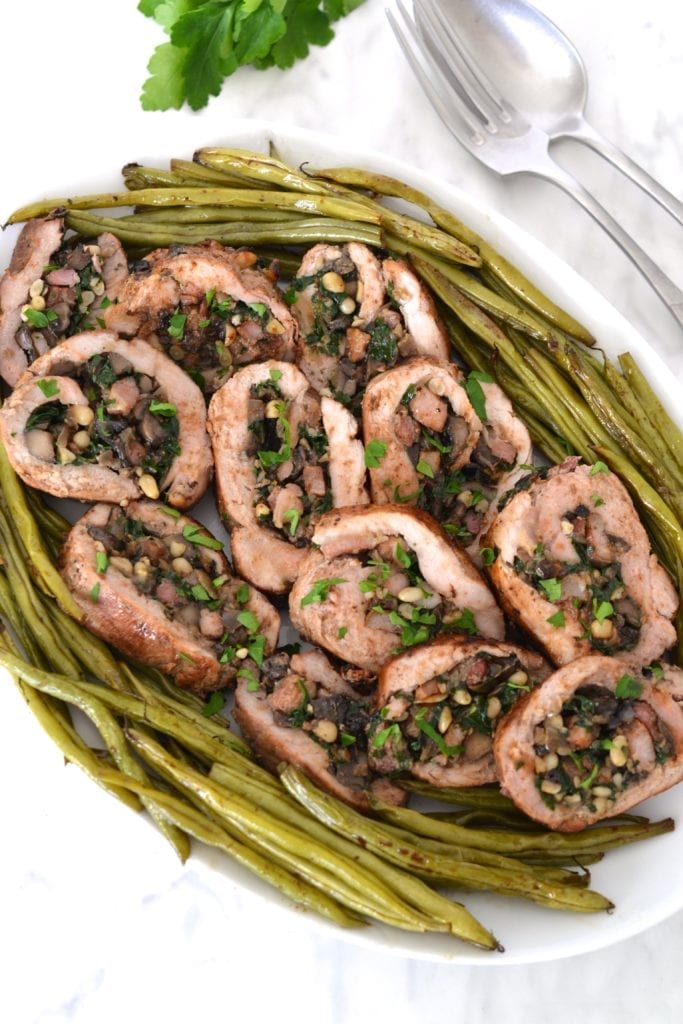 Full disclosure, this is the kind of recipe I would normally never even consider making. Stuffed tenderloin sounds so fancy and complicated that I always assumed it wasn’t worth the effort to make. Turns out I was completely wrong. 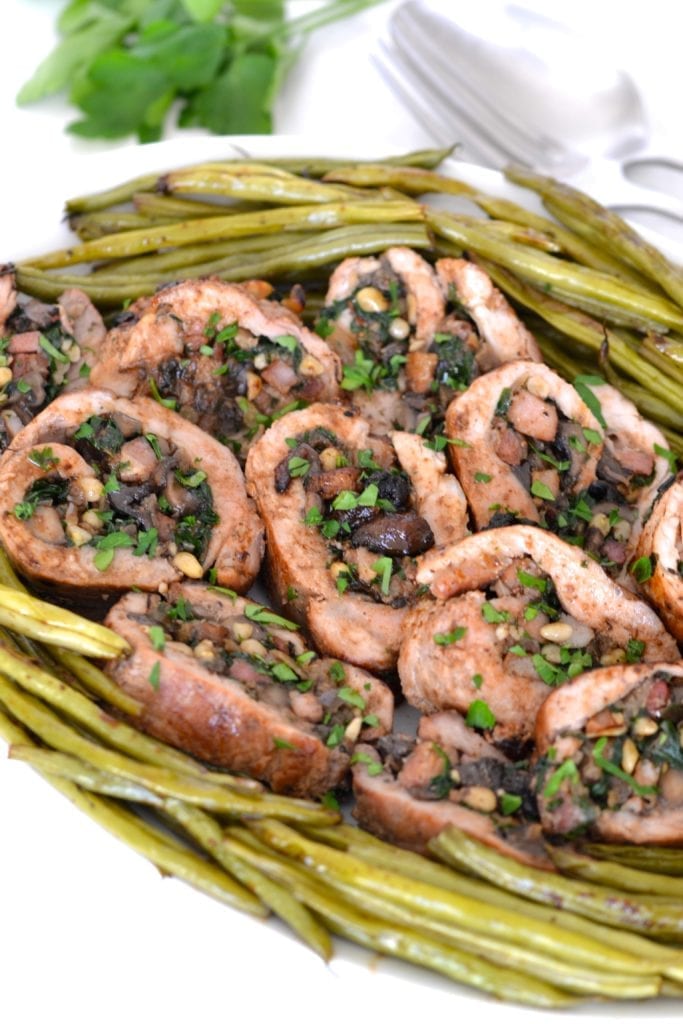 This pork tenderloin is one of those, “wow this looks so impressive” kind of dishes that is actually incredibly easy to make. Trurthfully this is the first time I have ever attempted stuffing tenderloin and I had visions of the entire thing self destructing in the pan. Not only was it a million times easier to make then I ever imagined, it was also a complete success. 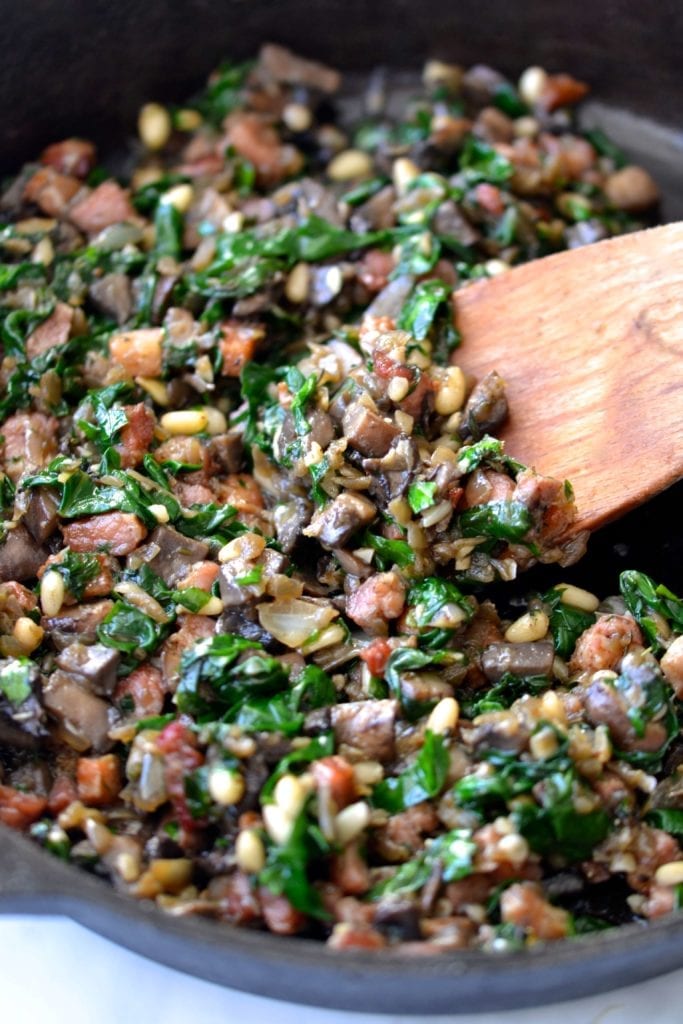 The filling is a delicious mixture of bacon (or pancetta), mushrooms, onions, garlic and spinach. Once everthing is cooked until tender, it’s time to prep the meat. 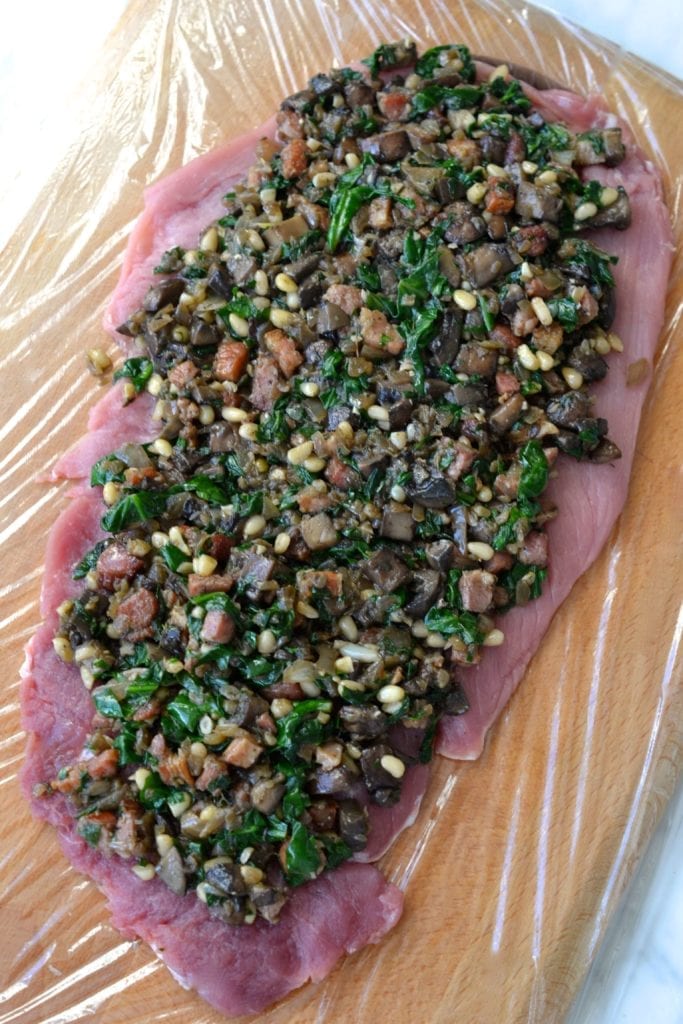 After cutting the tenderloin in half lengthwise (but not all of the way through!) you open it up like a book, place a sheet of plastic wrap overtop and then use all of your pent up anger to beat it until its approximately 1/2 an inch in thickness. 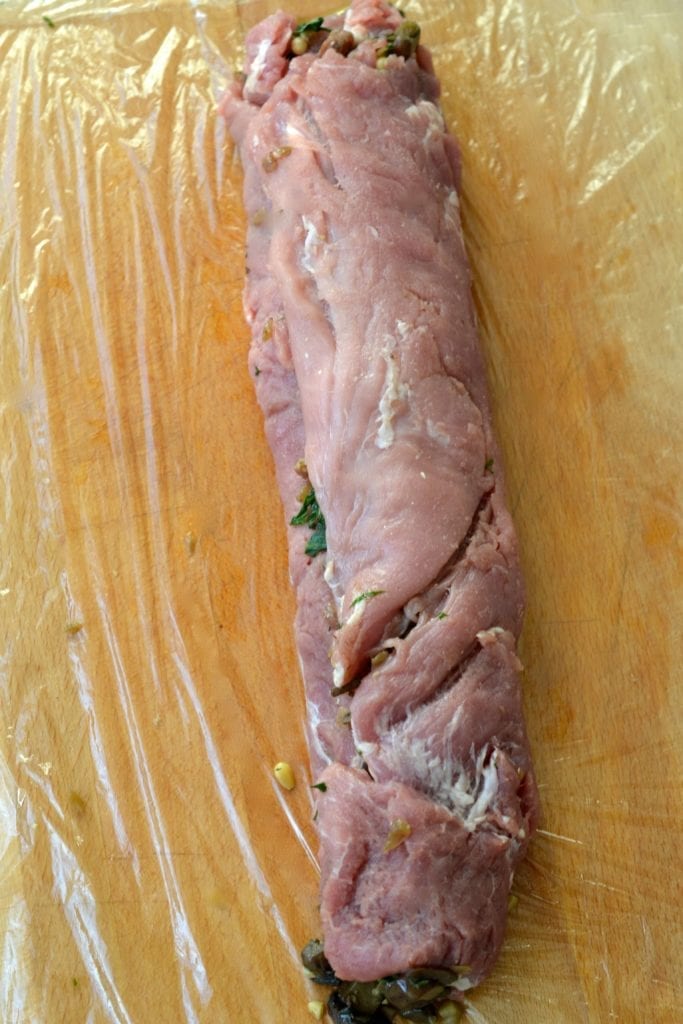 Rolling and securing the tenderloin was the step I was most worrried about. While you could use string to tie it together, I found that toothpicks worked just as well and are a lot simpler to use. Just make sure that they are all pointing in the same direction to make searing the tenderloin easier. 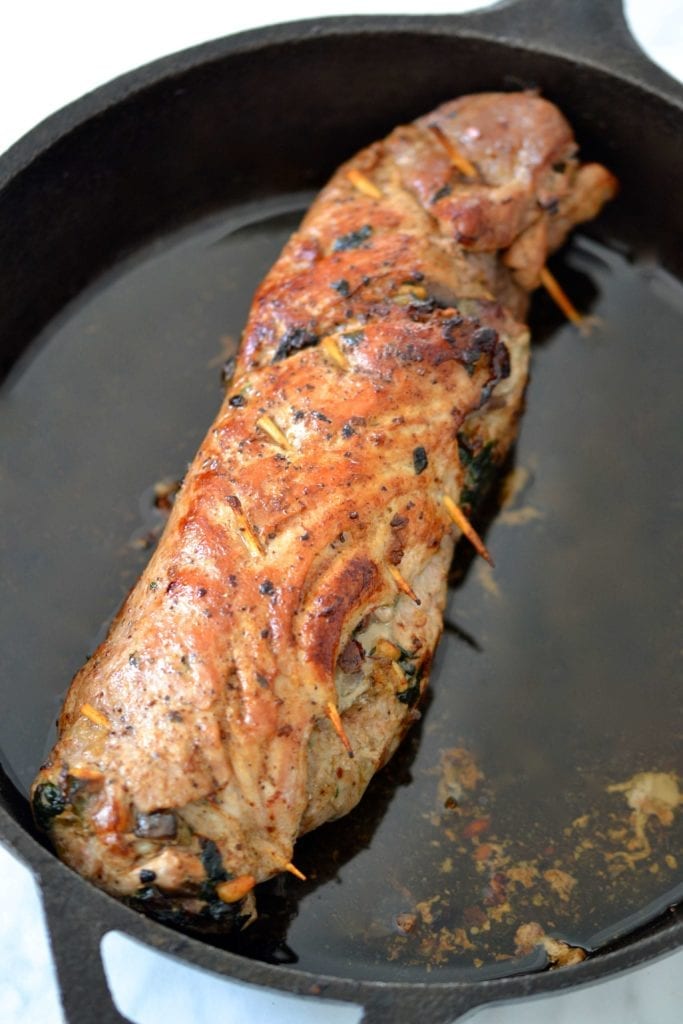 After quickly searing the tenderloin on all sides until it’s a nice golden colour, the meat is transferred to the oven and baked until it’s cooked through. Make sure that you leave the tenderloin to rest for 10 minutes before slicing it, this will cause the meat to be juicier and more flavourful then if it is cut right away. 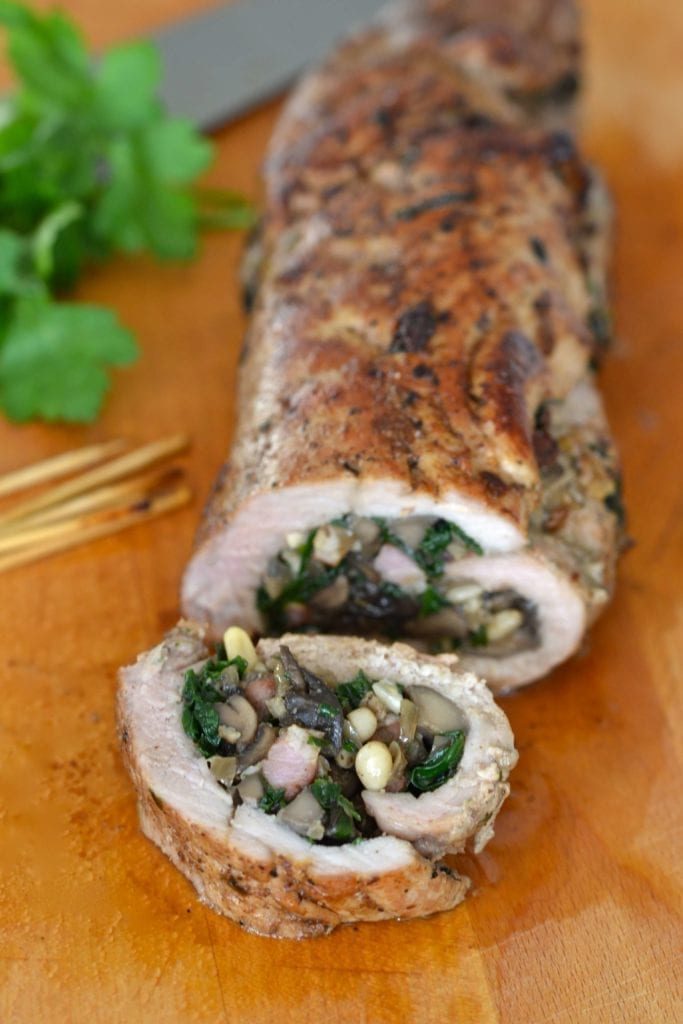 I absolutely love the flavours of this dish. This is a great one to prepare when you are trying to impress guests. Pork tenderloin is a really afffordable cut of meat, and it is very easy to double or triple the recipe depending on how many people you have to serve. 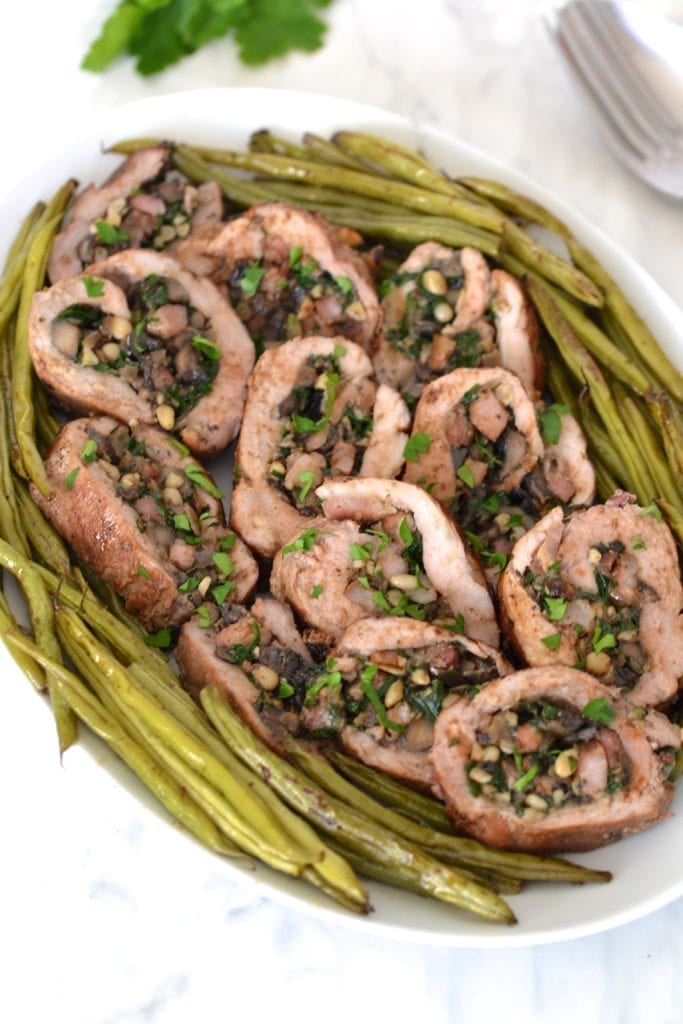 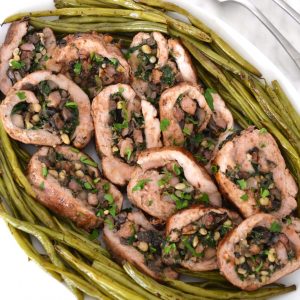 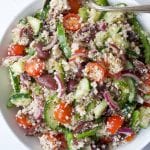 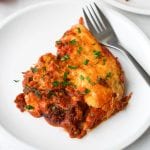 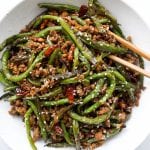 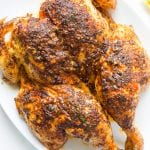